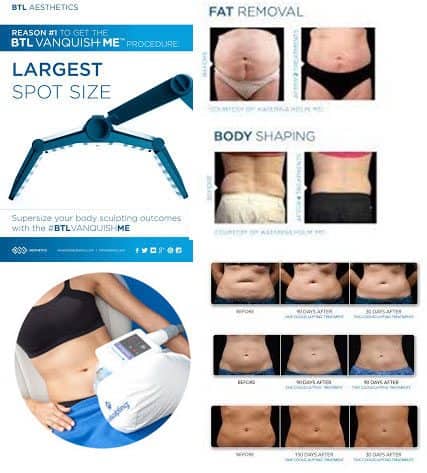 If you want to get rid of fat fast and efficient, without suffering any pain or discomfort, there are two devices that will help you do so. Both devices can be found in the office of a physician or medical spa, but, you may want to know what the differences between the two are, so you can make the right choice. Here are some aspects that will help you understand what Coolsculpting and Vaquish are, their functioning principle, effects, and price.

Coolsculpting and Vaquish are medical devices for removing fat cells without being invasive, in comparison with liposuction. Of course, they will not be able to remove as much fat as liposuction, but there are other benefits that come along. Even so, they are still able to melt fat cells permanently, so if diet and physical exercises didn’t work in removing fat in certain areas of the body, these two devices will make that happen. Here are functioning principle differs between the two devices. To start with, Coolsculpting is using very cold temperature to destroy fat cells by freezing. On the other hand, Vaquish is using the power of heat to destroy fat cells. After the cells are destroyed, the body will identify them as debris, passing them into the lymphatic system and completely removing them through excretion processes. If you adjust your lifestyle, which means to have a healthy and balanced diet and do physical exercises, these fat cells will not appear again, so the effect is permanent.

According to the studies made by the FDA, the efficiency of these devices is as follows. Coolsculpting managed to have an efficiency of 20 to 25%, concerning the fat cells that were destroyed during treatment. In the same study, Vaquish managed to acquire results showing that it managed to destroy 25 to 30%, being a bit more efficient. The method of treatment also differs. Coolsculpting treats very small areas of the body, as it is not a large device. It acts by sucking a small quantity of fat tissue inside the device, where it has to sit for about an hour. Because of this, lumps may appear, as the treatment is hardly even. Also, for an efficient treatment, there should be 4 to 6 areas that will use Coolsculpting, each of them needing one hour, so it can get quite lengthy. Also, the freezing sensation may be uncomfortable.

Vaquish is, again, a bit more efficient, treating large areas of the body, like the whole abdomen. Because it uses heat, there is no contact between the device and your skin, as it will slowly hover above the treated area. Thus, the result is more even and takes less time. About 45 minutes are needed for every session, which is performed once a week. The number of sessions range between 4-6 treatments depending to your body shape. There is no discomfort, as you won’t feel too much heat.

Concerning complications, both Coolsculpting and Vaquish can produce neuralgia, which is slight nerve pain, although the incidence is higher in the case of Coolscupting, because of the freezing process. Paradoxical Adipose Hyperplasia, or PAH, can appear after the treatment with Coolsculpting, which means that the treated fat tissue appears to be more prominent in the first several months, instead of disappearing. Usually, only through surgery the PAH tissue can be efficiently removed. There are no reports of this happening when using the Vaquish treatment. The costs for both of these treatments are rather similar however Vanquish is usually less expensive as there is no cost of consumables.