Acne is the most common skin condition, affecting 80% of people between the ages of 11 and 30. Often, over-inflammation of acne blemishes causes a breakdown in pore walls, scarring the skin. One out of five affected people will develop scarring (about one million in the United States!)

Scarring varies depending on the way your body responds to a wound. The skin attempts to repair scarring by forming new collagen fibers, but if there is too much collagen produced in the process of repair, then raised scars will appear. Other types of scarring are produced from loss of tissue, creating pits and indentations in the skin.

There are three types of treatable Atrophic or Depressed Scarring:

● Ice pick: Ice pick scarring resembles the tool it’s named after, in that it’s a hole that’s wide at the top and narrows to a point as it goes deeper into the skin. This type of scarring is common and can be one of the most challenging scars to heal. They are found on the forehead and upper cheeks, where the skin is thinner.

● Rolling: These scars are indentations that have sloping edges, making the skin look uneven and wavy. They are typically found on the lower cheeks and jaw, where the skin is thicker.

● Boxcar: Boxcar scars resemble oval indentations or craters, and have sharper edges that go deep into the skin.They are often wider than ice pick scars, but not as wide as rolling scars.These scars are common on the lower cheeks and jaw.

Fortunately, if the skin is free of breakouts and active acne, there are multiple procedures that can eliminate scarring and help the overall rejuvenation of the skin.

Essentially, PRP works by using your own blood to correct pitted acne scars on the skin. PRP Therapy allows the skin to trigger new cell growth at the source. It enhances the body’s own defense and repair mechanism, by injecting a concentrated dose of platelets where the patient needs it. It is used in the esthetics to enhance the production of collagen, promoting a plumper, younger and more radiant skin.

If acne scars are distensible, or able to be stretched under pressure, then they can be treated with subcision with PRP or fillers and biostimulators. First, we start with subcision to release scars and then inject with PRP for skin healing.

Both the clients above saw results from subcision with PRP only.

RF Needling can be combined with PRP treatments to treat ice pick and other challenging acne scars.

There are two types of PDO (Polydioxanone) threads: lifting threads for an immediate, natural lifted effect and smooth threads for stimulating collagen production to tighten the skin and bring new blood flow to an area.

PDO smooth threads are ideal for fine lines and acne scars. By placing the threads under and around the scars, they promote collagen production and smoothing of the skin. PDO Thread Lifts rejuvenate the skin and create an appearance of a natural face lift, while toning the skin and preventing early signs of aging, such as fine lines and wrinkles. PDO lifting threads create immediate improvements in the appearance of the skin. 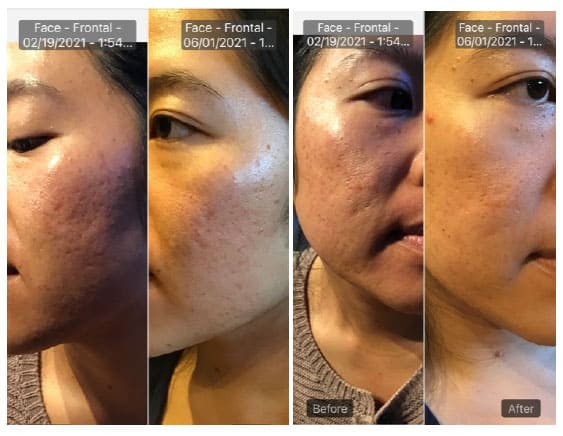 Our client above combined subcision with PRP, RF needling and PDO smooth threads to treat acne scarring and rejuvenate her skin.

If you are interested in treating your acne scarring using any of the methods discussed above please schedule a consultation with one of our medical staff in order to devise a comprehensive treatment plan.